I was recently in Washington DC for a shoot, and after the last day wrapped I knew what I must do – visit the world-famous Jack Rose Saloon. Fortunately, it was only 8 or 10 blocks from my hotel, and it was a nice night. So I walked over. 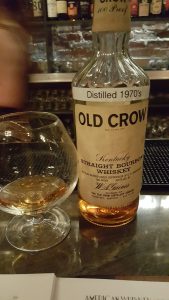 It’s really quite impressive when you enter – the amount of whiskey on the walls would choke a mule. I found a spot on the rail and sat my ass down. Grabbed a drink menu. Its like novel. Theres really that much to choose from.

I started with a small 1 oz pour of 1970’s Old Crow 100 proof. I’ve heard much about older Old Crow, and was anxious to try it. But it was disappointing. The nose was sawdust and old cardboard. The taste was about the same – dry, flat, some wood, a lot of cardboard. Not much of a finish. I took my time with that 1 oz, gradually a little water, and the water and time opening up did bring in a hint of sweetness. But only a HINT – it was hard to perceive. Once finished, I have to say this one sucked.Thats my rating – it sucked. 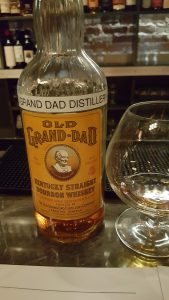 Next I went with some early 1970s Old Grandad. Again, 100 proof, again a National Distillers product, this one made outside Lexington & just down the road from Old Crow at the famous Taylor Distiller (now Castle & Key). This bourbon is known to be a butterscotch bomb. Wrongo. Not this bottle. When I nosed this one, it brought back a smell I hadnt smelt in decades. (As most know, smell is the sense that can dig out old memories the most). I had stepped back into a Kmart in the mid 1970s. Back then it just smelled like Kmart, but now I can identify that as cheap 1970s plastics releasing their gasses. Yes, the nose, as well as the taste and finish, was all about plastic. Yikes. No butterscotch, just cheap 1970s plastic (perhaps Japanese?).

I gave up. I wasnt gonna spend any more money on bad dusties. I paid and left.

Here lies the problem with discovering the tastes, the nuances, of dusty whiskey. You usually have no idea where it has sat for decade after decade. It may have been adequately stored or it could be totally ruined. Unless you have viable provenience of where its been, its a crap shoot. I lost on these. They may have been stored where they were exposed to heat or light. Perhaps the seal was not tight and there was 50 years of oxidation turning it to shit. I can’t accept an excuse of my “personal taste” – I have had plenty of whiskeys that, tho I didn’t especially care for them,  didn’t outright suck. I have no idea where Jack Rose acquired these bottles, or where they had been. But I’m surprised they didn’t QC these. The Old Crow was stale, and the Old Grandad was outright repulsive, yet they charge a pretty penny for this swill.