On Saturday, March 4, 2017, I hopped in my buddy’s car early in the morning and we set sail south to the motherland – Kentucky. Specifically, Louisville, for the last day of the 2017 Bourbon Classic. 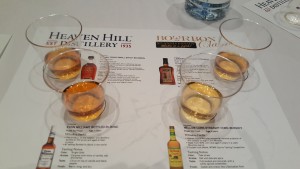 I had read about the event in the past and thought it would be cool to attend; this was the 5th annual happening. We arrived a little bit late due to a delay, so we missed a few minutes of the first educational session. There were four to choose from, and because we were late, we chose the Bluegrass Music and Bourbon session, thinking we would be less interruptive with a band playing. The music was good, with story telling of Heaven Hill whiskey and history. There were samples of four HH whiskeys – Elijah Craig (the 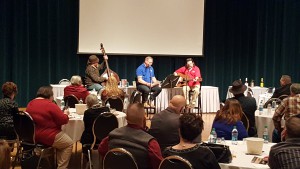 Next everyone went to the theater for a Q&A forum of industry professionals including master distillers and distillery reps. Interesting stuff, though the participants were rather guarded about what they said, and mostly stuck to hyping their products and company. 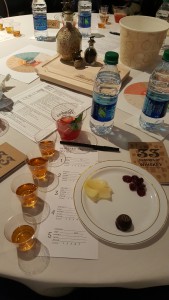 From there we again had a choice of four educational sessions. We chose one put on by Blanton’s about entertaining with bourbon. There was a bartender with a fruity bourbon cocktail (it was pretty good, tho bourbon cocktails are not my thing) to start things out. This was followed by a presentation about Blanton’s, and entertaining tips like how much whiskey and ice you need for a party. We got a swag bag, which was cool, and I got one of the reps to give me a Blanton’s black t-shirt. Nice.

Lastly was the food and open tastings. I must say the food was very good, and there was plenty of it. Especially loved the bourbon pecan pie. Most of the big distillers had booths, and some small ones as well. Of the tastings, I thought the Jefferson’s Ocean Cask Strength was notable (despite that whole cheezy aging in boats shit and it’s exorbitant price), as well as the 1792 Full Proof (I hope to write up a single barrel store pick version of this soon), and the Old Forester 1920 Prohibition Bourbon. The rest was pretty much the usual suspects.  I did taste one that was so bad I had to dump it out (don’t even recall what it was).

Overall, I was glad I attended, but probably won’t go back. Tickets were $155, and was not worth it at all. It was worth maybe $75. I think attendance would have been a whole lot better had they priced it accordingly. Afterward, we walked down to the Haymarket, an unassuming, friendly, downtown whiskey bar.  After a few minutes we got some stools on the rail and camped out there for a while, and 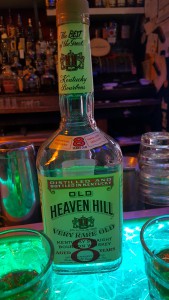 had some great conversations with some industry folks. We enjoyed the last pours from an old bottle of a Heaven Hill 8 Year – one I had never seen (I believe it is not made anymore). The Haymarket I will be returning to.