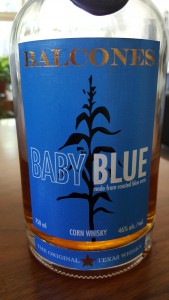 Balcones is an interesting distillery located in Waco, Tx with a brief but storied history. It was    started in 2008 by Chip Tate, a distiller with vision of how to make quality and unique craft whiskeys. During the first 6 years, and under the guidance of its president & founder, it introduced several kickass whiskeys. Demand soared, and capital was needed, so a partner was brought in. Then things got ugly, and the new board ousted Mr Tate. Now Balcones continues, and Mr. Tate is opening a new distillery. So now I guess we will have twice the choices.

The whiskey I’m enjoying is the Balcones Baby Blue Corn Whiskey. No age statement, 46% abv, made from roasted heirloom blue corn. By US law, to be called Corn Whiskey it must be at least 80% corn in the grainbill, and aged in either new uncharred oak barrels or previously-used oak barrels. Their website says nothing about this, but then again the website has scrubbed all mention of Mr.  Tate as well.

The nose has buttered corn and sulfur. Ya, the sulfur part may not sound great, but it works. Its kinda like someone saying Laphroaig has a nose of band-aids.  – it’s weird but it works with the whiskey overall. There are also some green vegetal things going on in the nose. A faint hint of cotton candy and smoke, even maple. Wet leaves.

On the palate, it has a nice viscous, oily mouthfeel. It hits the tongue with a bitter corn flavor, but it a smokey corn, like a cob slow roasted over a fire but overcooked to the point of slightly burnt. As it develops, the bitter burnt subsides and the sweet butter comes up from below.

The finish is fairly lengthy and complex. It is astringent, with smoke prominent. The smoke subsides as a dry corn taste comes back, then followed by and ending with a sweetness.

It’s pretty complex for a young corn whiskey. It’s obvious that Balcones takes care in producing this, and it shows. A very different whiskey than your typical bourbons and scotches; much more challenging. You have to come to this one with an open mind. Those who do will be rewarded. 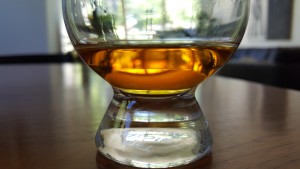