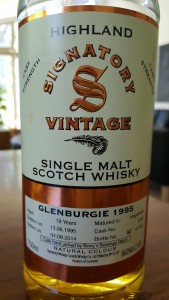 I like private bottlings. There is a lot of good things to say about them – they are often single cask, cask strength, and non-chill filtered with no added coloring. They give one a bit of a different take on a distillery’s whisky than the normal,  multiple-casks-dump that achieves a particular flavor profile that the distillery wants to adhere to. It’s just a naked taste of what the distiller was putting out that day and effect that one particular barrel had on the juice.

That’s the case with this one. 56.0% alcohol. Single cask, cask strength, non-chill filtered, 19-year-old Signatory bottling for Binny’s from the Glenburgie Distillery. The Speyside distillery (tho the bottle says Highland) was founded in 1810 under a different name, has been closed and opened numerous times, changed ownership several times, and is now owned by Pernod Ricard. This is my first experience with a Glenburgie. It’s a scotch that often flies under the radar because it’s product is mostly used in blends, namely Ballantine’s and Old Smuggler. It seems to me that private bottlings of Glenburgie are more common than their own.

So on to the malt. The nose hits with notes of sawdust, floral, and a fruit basket – citrus, banana, kiwi, and apple. Juicy Fruit gum. Some baking spice. A bit of grain and a bit of a vegetable note under all that floral and fruit. It takes a while to get it; its somewhat subdued. But with patience and repeated nosing it comes forward.

On the tongue, it’s creamy yet astringent. It’ll burn if you don’t add water. Vanilla. The fruit is there, but also with some bitter notes. The citrus is more like citrus rind. Cinnamon. Salt. Banana. Bread pudding. Sweet yet bitter. It’s complex, but the complexity is kinda limited to the play between the sweet fruit and the bitter rind and spice.

The finish is medium to long in length. Here is where the grain comes forward. The citrus rind is there, but then fades to more sweeter notes with spices like cinnamon with sugar. More slat. Sweet yet bitter. It’s complex, but the complexity is kinda limited to the play between the sweet fruit and the bitter rind and spice.

I’ve been on the fence about this one throughout the bottle. The first few drams were a bit rough and not as complex. After about 8 weeks of air time it opened up, and was nice. Its now been about 3 months, and the bottom third is not as good. Of course my opinions of it from opening to this point has been subjective, but hey – isn’t it always? All this is only about my opinions of the stuff.

I’ll give it a solid B. Complex, interesting, and enjoyable, but I’m not rushing to get another bottle before they’re gone. 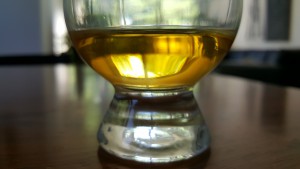 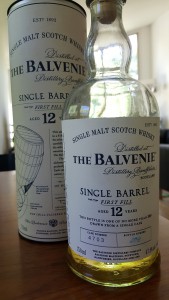 I was given as gift on my last birthday a bottle of The Balvenie 12 year old single barrel scotch. My good friend had recently   attended a tasting put on by Balvenie, and had enjoyed the samples. I guess Anthony Bourdaine made a brief appearance, said a few words about the whisky, then promptly left with his check in hand. Anyway, I was fortunate to be given this bottle of Speyside scotch. Much thanks to him (my friend, that is, not Anthony Bourdaine).

Upon inspecting the cardboard cylinder in which it came, I see it has many positive traits right off the bat. Its 47.8% alcohol, so fairly strong; its non-chill filtered; it has a greenish-straw color, so it appears to have no coloring, tho I didn’t see anything on the packaging that would indicate either way.

Its #109 from cask #4703. It was aged for all 12 years in a first-fill ex-bourbon cask, tho I don’t know from which bourbon distillery it came from. Balvenie is owned by William Grant & Sons, and it is my understanding that they only own Hudson Bourbon; I highly doubt Hudson produces enough to supply the number of barrels that Balvenie would need.

I really enjoy single barrel whisk(e)ys because I love the idea that it is a more organic bottling, rather than being engineered to a profile by mixing casks. You could get a great bottle, you could get a less-than-great bottle, but each cask is somewhat unique.

On the nose, its classic Speyside. Citrus, melon, sweetness, a bit of malt, a little vanilla. On the palate, its sweet, a little salty, and malty. A little unripe apple, cinnamon,but I did not find it that complex here. The finish is medium to long, drying with time, and more complex. A little tart, with vanilla and baked fruit

Overall, there is nothing bad with this whisky, however there’s nothing that really bowls you over either. It’s tasty, its satisfying, but not at all challenging. Balvenie is a popular, good-selling scotch, and this is probably why – it’s a lowest-common-denominator thing. I feel it deserves a solid B grade, because there is nothing at all sucky about it. But it can’t get a B+ or above because it doesn’t go out on a limb. Not much that’s unique, or bold, or complex, or challenging. Again, there’s nothing wrong with being that way, and there is a need in the market for just such scotches. So it may be good for a party or a group that includes whisk(e)y newbies, because it could be a good place to start. It could also be a good first dram in a tasting, setting the bar for enjoyable and not off-putting, and you could then go on to more complex drams from there. Cheers. 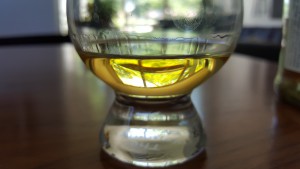