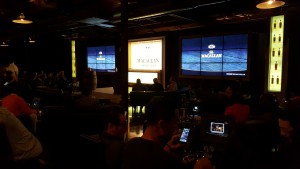 A couple nights ago I attended one of the Chicago Raise the Macallan tasting events. I must say, I left disappointed.

It wasn’t because of the caliber of the whisky. There is no denying that Macallan makes some very fine Scotch. It wasn’t because of the gentleman who moderated and presented the event. He was cordial, friendly, entertaining, and kept things moving along. And I do appreciate the hors d’oeuvres that were served beforehand. In fact, the bacon-wrapped dates were stupendous.

The problem is that it was a tasting yet they were not really giving you enough scotch to actually taste and evaluate the whisky.

I find there are two kinds of whisk(e)y tastings. The kind where you walk around from table to table sampling many distillers products. The other is when one distiller or company sits you down, make a presentation about their products, then puts the chosen products down for you to taste. This was the latter.

When I taste, I like to first nose the dram, then take that first sip. I roll it around in my mouth, swallow, then wait a couple minutes. This allows my nose and mouth to become somewhat accustomed to this new whisk(e)y. Because of its high alcohol, there is shock to the taste and smell senses at first. But after a couple minutes, my senses are now tuned in and ready to take a more careful nosing, follow by a sip that includes a longer chew. Now I can really note all the characteristics and subtleties of the dram.

But not at Raise the Macallan. The pour was maybe around 2-3 tablespoons. It was really only 1 sip. I found myself taking a very small initial sip, but it was not even enough to coat my tongue. After that, there was not enough left to really nose it anymore, and the second sip was also too small. What a shame.

I’ve been to many of these kind of tastings, and this is the first time they did not pour enough to really get a sense of the whisky. Typically the pours are of an average dram, and you can request a little more if there was a particular expression you wanted a little more time on. You can also go to the next whisky, then come back for comparisons. I’ve even been to a smaller Macallan tasting a few years ago, where the pour was of that average amount. And that night my buddy walked out with a bottle of the 18. So in that case, the marketing worked for Macallan. What happened a few nights ago was more akin to coming to a table in Whole Foods where they are passing out samples of some alcoholic beverage. They give you just a small taste. And that is what I would expect from a grocery store. But not a big event like this.

So am I just upset because I thought I was walking into enjoyment of lots of Macallan? Perhaps. But they spent much money on the hors d’oeuvres, the video presentations during the event, the ipads on the tables so you could record what flavors you tasted (of which they only gave you 8-10 choices they had pre-selected), and cramming 200-300 people in there. If they want to market and sell the product, shouldn’t they allow people to really get a sense of the flavor profile and enjoyment that can be had from the product?

They will be in New York, Boston, LA, & Dallas over the next few weeks. So if you go, just don’t expect much.