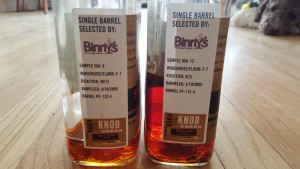 For some reason, I’ve delayed writing about this bourbon. Not sure why. I have been working on several bottles since last summer, when I first spotted these at a Binny’s, the Chicago-area liquor chain.

Beam, aka Beam Suntory, puts out Knob Creek, presented as one of their premiere bourbons, along with Booker’s and Baker’s. Regular old Knob Creek is a 9-year, 100 proof small batch, and much less expensive than Booker’s and Baker’s. You can then step up to the Knob Creek Single Barrel, which is again a 9-year, but comes from a single barrel and is bottled at a hefty 120 proof. There is also a Knob Creek Rye & a Knob Creek Maple (in case you want to drink bourbon but don’t like bourbon. Also great for waffles). What Binny’s did, with their huge buying power, was to pick out 8 of their own single barrels, and had them bottled at barrel-proof.

I have two examples here. As you can see from the picture above, each of their 8 barrel picks came from different warehouses, floor, ricks, and tiers, Date barreled and dates bottled differ, tho not by much. Its kinda cool that all that info is on the bottle.

On the nose, there is only a slight difference between these two. Example one is a little less sweet, with a bit of a dryer nose, more sawdust, orange, and a bit of smoke. Example two has more cola, cherry, and maple. On the palate, example 1 is dry, semi-sweet, Example 2 is less dry, a bit creamier, with more caramel, and overall sweeter than #1. The finish on both is medium-length, with black pepper and sawdust. The finish on #1 has a bit of that smokey char coming thru; example #2 has a bit of burnt caramel.

While writing up these tasting notes, I really regret I didn’t write this much sooner. These bourbons had much more going on when they were less oxidized. I do find bourbons often change for the better as they oxidize, altho there are exceptions. I find that most bourbons really open up after 4-8 weeks, with the sweet complexity going up and the burn going down. But, after 9 months, they start to flatten, and the complexity is lost as the flavors start to muddle together. This is the case here. Last summer this was my go-to bourbon, and if I was going camping, going to friend’s, or on the road, this came with me. I loved that it was not too sweet, not too rye-forward, was incredibly strong at 130+ proof, had some age at 9 years and some change, and was only $40 a bottle. A combination you won’t find in a craft bourbon. 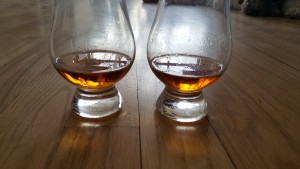 This was not a Binny’s exclusive, tho. I was at UFS in Peoria, home of the good-but-not-great-whiskey-selection-at-often-lowest-price. And they had their own barrel selection, tho not eight of them. Chalk it up to volume plus Kentucky proximity. Thought I saw another one somewhere as well, tho I can’t remember where. Clever marketing tactic by Beam.

So what’s the moral of the story? Perhaps don’t let those whiskeys sit around too long. Finish them up and move on. I enjoy having a collection on hand, and I guess I should start experimenting with those inert gas things that can use to take the oxygen out of a bottle. Another moral of the story is don’t poo-poo a brand because it’s produced in massive amounts – it can still be excellent. Beam puts out shitloads of Knob Creek, but if you can get it in a single-barrel, barrel-proof-or-near version, then jump. Beam may be a mega-producer, but you can’t deny they know something about making bourbon.

I’m going to give both of these an A based on my memories of how much I enjoyed them. They didn’t hold up as well over the course of 9 months, but I do remember really enjoying these last summer and telling friends to go get one before they are gone. After all, it’s not just about geeking out on whiskey and its subtleties and industrial politics, it’s also about creating those memories you get from kicking back and enjoying what life can be like with a dram in hand that your really enjoying. Ya, slainte.

I know where I can still get a couple of these. So do I go get a couple more to stash away, or do I gamble on waiting for a new batch of to come out? Well jesus, I think the answer is clear!