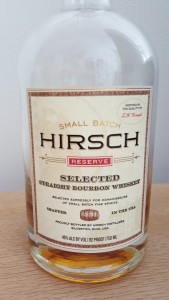 On a recent visit to a favorite libations shop, I was speaking with the manager, getting the skinny on what was new and what might be on its way. In our conversation, he told me he had been enjoying Hirsch lately, and recommended I try a bottle. Since I respect his opinion, and the price was alright, I jumped.

First of all, this is NOT to be confused with the old A. H. Hirsch bourbon. Yes, they borrowed the name, and the label says “Inspired by the quality of A. H. Hirsch”. But if you happen to find a bottle of the old Hirsch, well, it ain’t gonna be cheap.

So it’s not the old Hirsch. So what is it? The bottle says it’s “bottled by Hirsch Distillers, Silverton, Ohio”. If you look up Hirsch Distillers, it’s a trade name owned by Meier’s Wine Cellars, Inc. Meier’s website says they “generate a tremendous volume of alcohol and non-alcoholic beverages for internal and external clients”. When you look at the back of the bottle, it says it was distilled in Indiana. Well we know what that means – it was made my MGP. It also says on the back it was bottled for Anchor Distilling, San Francisco. Wow, that’s complicated. Made by MGP, bottled by Hirch (Meier’s) for Anchor. It’s the usual “craft spirit” smoke and mirrors. At least it says who is involved on the bottle, unlike others.

Now I usually stay clear of MGP juice. Since I had the Bulliet Bourbon, which I did not like, my opinion has been tainted. However, these guys make so much juice, it can’t all be bad, and it can’t all be the same mashbill/yeast/age. I do respect Anchor Distilling because I love their Old Potrero Rye. And I respect the opinion of my friend at the shop, so I tried it. And I was pleasantly surprised.

It’s 92 proof and has no age statement. My guess would be 4-5 years old. With the bottle freshly opened, I found that the palate had a dual personality. Upon entry, I git a spicy rye kick and alcohol taste on the front of my tongue. But that was followed by a creamy sweet butterscotch taste on the back of my tongue. Cool. Complex.

As the bottle went down, it did change, tho, as bourbons usually do when they get oxidized. Now it has a nose of a little grain, lemon-lime, date, dark chocolate, black pepper, and alcohol burn. The palate no longer had that dual personality; it had become integrated. Up front was the butterscotch plus caramel with a good creamy mouthfeel, a little rye spice, and a bit of oak. The finish is brief, dry, again some oak.

I would say if you get a bottle, finish it in the first couple weeks. I personally enjoyed it much more early on. After 2 months, its not as good and a bit flat. The price is in the mid-thirties, so you may want to reach for it if you are looking for something new to try. Of course, if your not looking for something new, you’re always better off spending less money on some Elijah Craig 12, Evan Williams Single Barrel, or Four Roses Small Batch.