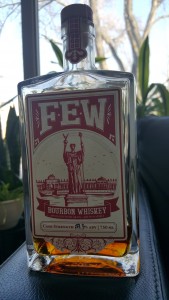 FEW Spirits is a local distiller for me, located just north of Chicago in Evanston, IL. They are generally regarded as one of our better local distilleries, and I haven’t tried any of their products that are in the least bit sucky. They make bourbon, rye, white whiskey, a couple gins, and a single malt. The also have a Malort-type Swedish wormwood liqueur, which I think is a one-off and I can’t remember what they called it. If you haven’t suffered thru the manly Malort before, google it. Then skip it. Tho Letherbee Distillers make an enjoyable version called Besk. Ya, ya, I digress.

I was at a Binny’s location for a scotch tasting event, and FEW was there giving out samples on the other side of the store. I’m sure they knew there would be a great turn-out, so showed up with a table and some bottles. I tried their limited, special-edition, cask-strength, Binny’s-only bourbon and rye. Both were quite good, and a week later I picked up a bottle of the bourbon for my xmas holiday travels (the family & I packed up the pop-up camper and headed for the Keys. This required a bottle of the FEW, Pappy 12, & Trader Joe’s Islay Storm. The latter two will be reviewed forthcoming. Ya, ya, I digress).

This was a bit of a bargain since it was the same price as the regular 93 proof version, but at 118.6 proof. It’s not a single barrel, but a vatting of 3 barrels, so whatever bottles they got from those 3 barrels is it. Three grain – corn, barley malt, northern rye. Aged in barrels from Minnesota.

With water the nose on this baby is sweet, with cola, cinnamon, nougat, root beer, sawdust, vanilla, & new leather. Mouthfeel is medium but chewy, with a palatte of toffee, butterscotch, caramel, tobacco, leather, some oak, mixed with a bit of rye spice and a bit smoke. Finish is fairly long, simultaneously featuring some sweet and some dry, tobacco, smoke, a bit of salt.

It’s good stuff. I assume it’s relatively young for a bourbon, and doesn’t have the taste of a 12 year old, but it is not harsh at all, even when you try it without water. To me that’s the sign of a whiskey that was made well, in smaller batches, with careful attention to the cuts. If you get a chance, try it, tho it may be tough to find it at this proof. They should think about doing more limited editions of this strong stuff.

Again, digress; as far as my holiday camper trip, this was my dram of choice. For some reason it seemed like a better choice than the Pappy. For xmas eve at my in-laws, I brought the Islay Storm, as those guys are scotch drinkers, and it’s a surprisingly solid choice for the price. For New Years Eve, I brought the FEW, but everyone but me stuck to wine or the Not Your Father’s Root Beer (another local product). Oh well. More for me. 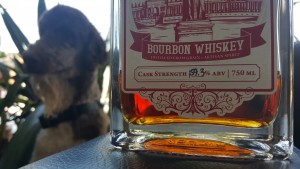