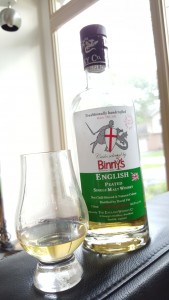 When I go on a golf weekend with a group of friends, of course a bottle is required baggage. When a day involves 36 holes, a flask is needed, as well as a relaxing dram afterward. So on one such trip, I picked up a bottle of The English Whisky Company’s Peated Single Malt, a Binny’s Select Cask. It was on sale, no chill-filtering, no coloring, cask strength at 60.9%. Bottled from a vatting of two casks, # 108 & 166, and was # 380 of 426 bottles. Sounded like a good candidate for the job.

I had read about the English Whisky Company, producing out of the St. George Distillery in Roudham, Norfolk. Back in 2009, it was the first English whisky to hit the market in 100 years. Seems kinda funny that England, being next to the prolific Scotland, falls that short. But such is the case. When they started up, they got Ian Henderson, formerly of Lafroaig, to help out. If it’s like Lafroaig, I thought, I’m game.

The nose featured citrus, was somewhat skunky, some ash. Some leather. Nose is not that strong. Lotsa of alcohol. It noses like young stuff, as I imagine it was. There was no age statement. Adding more water brings in more vanilla behind the ash, but still noses young with much alcohol. Not much of a nose, but hey, it’s young.

The palate was ashy upon entrance and all the way thru, and tastes of old paper midway. Crisp at the very start of entrance but that doesn’t last; it gets kinda muddy. Adding more water brings in more sweetness, a little bit of butterscotch. Not a lot of complexity under all the peat, tho. As I said, muddy. Nothing much jumps out under the peat.

Finish featured ashy peat, more like Ardbeg than the sweet peat of Lafroaig, though there is some vanilla. Adding more water brings a little more sweetness. Astringent. The ash makes it a pretty long finish.

I just didn’t care for this. Now I love a good peated Scotch (this obviously is not Scotch), but I don’t like peated for peated sake. I’ve tried plenty of drams where it was all peat but not a lot underneath, and that’s this one. With its very ashy peated flavor, I would compare this to Ardbeg, but it just doesn’t have that complexity that Ardbeg has under the ash. And being young is no excuse; try a bottle of Kilchoman , and you’ll be blown away by how great a young peated whisky can be. I won’t be coming back to this.