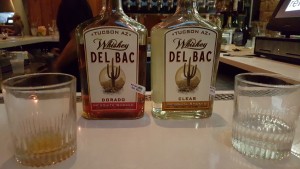 Working as an independent contractor in film & video, I sometimes have to go on the road to shoot a project. When I do, I like to check out the local craft distilleries & try something I wouldn’t be able to get at home in Chicago. Such was the case recently when I was working in Tucson, AZ. A whiskey came to my attention called Whiskey Del Bac, produced by Hamilton Distillers in Tucson. They produce three whiskeys – Classic (unsmoked), Clear (smoked, unsaged), and Dorado (smoked & aged).

The story goes that one evening, while sipping scotch & bbq’ing, Stephen & Elaine Paul discussed making a smoky whiskey in a Southwest style, using mesquite instead of peat. But they didn’t just talk about it; they did it.

And they do it right. They get their barley from an organic source in Colorado, and then do their own malting. Excellent. In these days of sourced whiskey, these guys have their own malting floor! And they dry their malt with mesquite harvested from southern Arizona. They keep it real by using Tucson tap water (where else you gonna get water in the desert?). Its local. Its craft. Its good.

I tried the two smoked versions, the Dorado and the Clear.

The Dorado has a nose of caramel, mesquite, cola, and was a bit bourbon-like for being a malted barley whiskey. The entry is sweet, but not like bourbon. You can taste the alcohol, but it doesn’t burn. Some oak. Mouthfeel is relatively thin. Then that great, dry mesquite smoke sets in. Ya. The finish is more dry smoke, cola, and has a good length.

The Clear is a much different animal. From the nose I could have sworn it was mescal. Really. I get lime, grain. Upon entry I get grain, as to be expected from a clear whiskey, as well as frosting, juicy fruit, lime, and smoke. The finish is dry, short, with smoke and a bit of lime.

I really liked the Dorado. I like smoky whiskeys and this is one very unique dram. It reminds me a bit of Balcone’s Brimstone, but in many ways is more refined. Brimstone really hits you over the head with the smoke and proof, where as Whiskey Del Bac is a bit more complex and nuanced. The Dorado is aged only 6 months or so in small, 15-gallon American oak barrels (probably why I was reminded of bourbon on the nose), as is to be expected for a new distillery; if they age some of this stuff longer I would imagine it would lead to incredible, very complex results. I found the Clear to be fascinating. I’m not a regular drinker of clear whiskeys, but this one is so different it has to be tried. Its great to try a local craft whiskey that uses local resources to make a truly local dram. And its great to see that Hamilton is letting the ideas flow and producing something truly unique. I expect we are gonna be hearing a lot more about Hamilton as this new distillery matures and grows.

You just have to try these truly American whiskeys. However, good luck getting some unless you’re in the area. If you’re there, seek them out and thy shall be rewarded. I wanted to get a bottle to take home but the stores said there was none to have. I read they are expanding, so hopefully their distribution will widen. Then everyone can try it, & the craft whiskey community may see what inspiration, hard work, & not taking the easy road can yield. 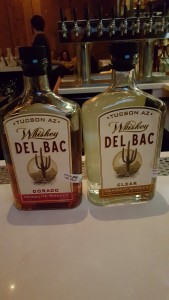