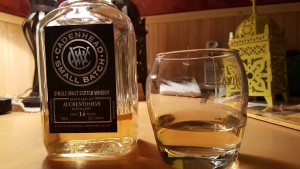 I picked up a bottle of Auchentoshan  14 year old bottled by the indybottler  Cadenhead. It was on clearance, marked downsignificantly. It is not chill-filtered, and has  no coloring. Oh yeah, and best of all seems to be close to cask strength at 55.1%. Since I’ve enjoyed my limited experiences with Auchentoshan in the past, and because it checked all the right boxes, I snatched it up.

Auchentoshan, of course, is one of the few lowland distilleries, in Clydebank just outside Glasgow. Its origins seem kinda murky, and a web search will yield establishing dates of 1800 thru 1834 or so. Word has it that it was started by Irish refugees, and that would make sense, as it is a triple-distilled whisky, just like Irish whiskey. It has soldiered on thru the years, barely escaped the bombs of WWII (some warehouses were lost), has changed many hands many times, and is currently owned by Suntory.

The nose on this is light and fruity. There’s lots of pear, some honey, and some furniture polish from all that alcohol. Cinnamon. Even a touch of maple in there.

The palate upon entry is clean, light, malty. Semi-dry, pear, slightly astringent, slightly soapy (not in a bad way). Less complex here than the nose and finish.

Finish has some burn at first, but that fades quickly into spice, and a little smoke (not peat tho). Medium length and gets grainy and dryer.

I like this. Perhaps because I love a good Irish single malt so much, as it is similar. Now I know some people poo-poo Auchentoshan as being “boring” or “lacking substance”. However, I don’t think that’s really fair. Its triple distilled, so the character is going to be lighter, subtle, more nuanced, and takes more attention. It’s not gonna hit you upside the head. But this doesn’t make it boring. I’ve heard people make the same complaints of Irish whiskey. Someone once said to me, when told about my fondness for Irish whiskey, that he started on Irish whiskey but then graduated to Scotch, insinuating that Irish is for beginners. And I’ve read the same about Auchentoshan. Sure, it’s a good place to start because of its inherent lightness, but to suggest serious whisk(e)y drinkers can’t enjoy it is bs. If it’s not your thing, fine, but don’t go dissin’ it.

Enough ranting .I like this stuff, tho I tend to be a sucker for cask strength stuff. At regular price I might hesitate, but I would hesitate at anything in that price range, so there’s good value in this when marked down. 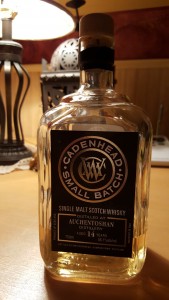