For my first posting, I thought it best to start with a write-up of one of my favorite whiskeys – Knappogue Caster 12-Year Old Single Malt Irish Whiskey. I’ve been enjoying this one for years, and it never disappoints.

Knappogue Castle is an independent bottling of whiskey distilled at Bushmills. It is aged for 12 years in ex-bourbon casks. Bottled at 40%, with some chill filtering, but most likely no coloring. Most Irish whiskeys are blends, so it’s always great to have single malt versions  available to really showcase this style of whiskey, and fortunately there seems to be more Irish single malts coming to market.

Up until around 2007, Knappogue Castle was bottled with a vintage instead of an age statement. 1995 was the last vintage year, so if you see a vintage bottle, grab it! Notably, you could probably find their famous 1951 vintage locked away in the back of some large liquor stores, but that will cost you over $1K.

As I usually go through at least one bottle every summer, I find that there are subtle differences in it from year to year. Not a lot, though. The signature crisp, light taste, the citrus and peach, the dry and bitter woodiness are always there. However, some years seem to be slightly sweeter and some more bitter. Knappogue Castle also has a 14 year, 16 year, and 17 year expression, and are much different because they are finished in sherry barrels. I have tried the 16 one one occasion, but didn’t like it quite as much as the 12. Then again, I am not a big fan of sherry monsters.

Knappogue castle has a very light, straw color. This year’s, 2015, has a nose with citrus, honey, a little astringent, a little mint, some light malty cereal, a touch of vanilla. Upon entry, I get the lots of fruit and citrus, the crisp, and that honey. It develops with peach – not as much peach as I found last year, but it’s there. That’s followed by the bitter, which I love. Many Irish whiskeys get sweet here, but this one develops a great dry bitterness, most likely from the extra time in the barrel. The taste overall is very crisp and light. The finish is short to medium, with mint and citrus. The dry and bitter lasts a bit longer. The oakyness really comes out in both the development and the finish.

I highly recommend this one. The light, crisp, dry taste makes it great f or warmer weather, but really is great anytime. Its usually around $40, which isn’t bad for a 12 year single malt. I’m lucky enough to find it at a place that sells it for $30, which makes it a helluva deal. And for those that stick mostly to scotch, it’s a welcome break from the usual. I’d love to see a cask strength version of this. Try it out, and don’t wait for St Patty’s Day. 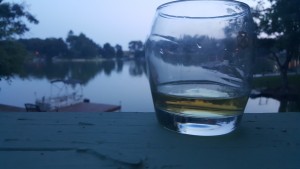